Israel’s inclusion of immigrants, the handicapped and special-needs people

Palestinian leaders have described plans by Israel to install wheelchair access at the Tomb of the Patriarchs as “tantamount to igniting a religious war in the region and in the world,” and a “war crime,” and have called for a third intifada in response. The changes will make the site more accessible for Jews and Muslims alike.

In 2019 Israeli politicians unveiled a plan to install an elevator at the site in Hebron, known as the Cave of the Patriarchs to Jews, and the Ibrahimi Mosque to Muslims. For Jews, is the burial site of the Jewish Patriarchs Abraham, Isaac and Jacob, and Matriarchs Sarah, Rebecca and Leah. Muslims also revere Abraham as the father of Ishmael.

In May, the IDF issued an expropriation order for the site so that construction on the project could commence, making the ancient biblical site wheelchair accessible. The move bypassed Hebron’s Palestinian-run municipality, which opposed the project. The Palestinian Authority also opposed the project, denouncing it as “Judaization.”

Palestinian Authority Minister for the Civilian Affairs Hussein al-Shiekh tweeted in response, “today the so-called Israeli Minister of Defense signed a decision to confiscate [and] annex parts of the Ibrahimi campus in Hebron, which is a violation of the Hebron protocol, an end of the agreement signed between the PLO and Israel [and] a continuation of the #annexation project in the [West Bank and] #Jerusalem.”

Now it appears that the Palestinian leadership kept up the rhetoric in August, denouncing the plans as a “war crime” and incitement to violence.

Jews at the Tomb of the Patriarchs in Hebron over the Passover holiday (photo credit: IDF SPOKESPERSON’S UNIT)

Every day Commander Rami Hassan drives 90 miles each way from his home in Kfar Yarka in the Galilee to his military base in Yehud near Tel Aviv. But he’s used to it. He’s been in the Israel Defense Forces (IDF) for 26 years.

A member of the Israeli Druze community, Hassan has two great loves: his family and his country. A husband and father of four, Hassan comes from a family dedicated to public and national service. His father served as a border police officer and all of his brothers served in the IDF.

“I love to give as much as I can, to contribute as much as I can,” he said. “In our culture, we learn from our parents, our cousins. They all do service — a love for the land, for the country.” While Druze make up under 2% of Israel’s population, they are disproportionately found in the army and police forces.

Pvt. E never thought he’d join the army. As someone on the autism spectrum, he struggled with certain social situations and would get easily distracted. Now, at 19, he is serving in a sensitive intelligence unit in the Israeli military, working in software quality assurance and defying what he and many of those around him thought he could accomplish.

Israel has for decades exempted people on the spectrum from joining the military, a compulsory duty for most Israeli Jews. But in recent years it is increasingly enlisting them, harnessing their special capabilities for certain meticulous tasks and including them in an Israeli rite of passage that can boost their independence and open professional doors.

Pvt. E. is part of a program called Roim Rachok, or “seeing into the distance,” which provides training and assistance to Israelis on the autism spectrum who wish to enlist in the military. The program’s founders saw the inclusion of people on the spectrum as a way to help usher them into a self-sufficient life once they are discharged.

Pvt. Shahaf is a volunteer soldier in the IDF, this is his story: pic.twitter.com/QcYn4ndYuu

The Israeli Army Unit That Recruits Teens With Autism; Many autistic soldiers who would otherwise be exempt from military service have found a place in Unit 9900, a selective intelligence squad where their heightened perceptual skills are an asset, by Shira Rubin, The Atlantic, January 6, 2016. Excerpt:

TEL AVIV—For eight hours a day, E., 21, sits in front of multiple computer screens, scanning high-resolution satellite images for suspicious objects or movements. As a decoder of Israel’s complex and often heavily civilian battlegrounds, he’s been critical in preventing the loss of life of soldiers on the ground in several different situations, his officers say.

For many people, combing through each millimeter of the same location from various angles would be tedious work—but E., who is on the autism spectrum, describes the job as relaxing, “like a hobby.”

E. (he requested his full name be withheld to comply with army protocol) is a corporal in the Israel Defense Force’s “Visual Intelligence Division,” otherwise known as Unit 9900, which counts dozens of Israelis on the autism spectrum among its members.

The relationship is a mutually beneficial one. For these young people, the unit is an opportunity to participate in a part of Israeli life that might otherwise be closed to them. And for the military, it’s an opportunity to harness the unique skill sets that often come with autism: extraordinary capacities for visual thinking and attention to detail, both of which lend themselves well to the highly specialized task of aerial analysis.

A foiled terror attack provides the inspiration for new levels of inclusion.

Imagine being an Israeli kid with Down Syndrome and dreaming one day of becoming a soldier in the IDF.

Imagine the parents dreaming to see this special child gain an independent life.

As the video below shows, “Great in Uniform” is a project that integrates young people with disabilities into the IDF, as soldiers in every aspect including a uniform. The goal: to provide a successful path of integration into society.

It all started in 2001, when IDF Lt. Col. Ariel Almog was driving in the Jordan Valley and spotted a terrorist approaching a bus full of passengers. After a short struggle, Almog succeeded in neutralizing the terrorist, who was wearing three explosive devices.

Then suddenly, shots were fired at Almog from a nearby olive grove. A “back-up” terrorist was there to assist in the planned carnage. Almog was shot in the head, but miraculously managed to fire his own weapon and neutralize the second terrorist as well.

After realizing their opponents were at a disadvantage, the Israelis surprise the Africans with a useful gift 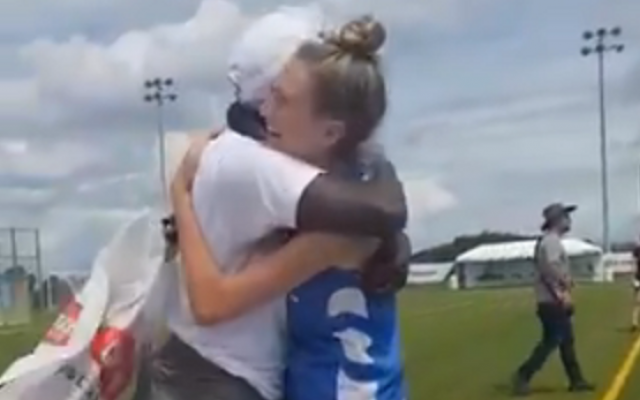 Israel’s under-19 Women’s lacrosse team showed some true sportsmanship during the World Championship in Ontario, Canada, last week, after they realized their opponents were playing at a disadvantage.

During their match against Kenya in Peterborough on August 6, the Israelis noticed the underfunded African team did not have cleated shoes as is standard in the sport. The grass was wet from rain and the Kenyans were slipping and having great difficulty with the field conditions. Israel eventually won the game 13-4.

Ashlee Aitken, a liaison for the Kenyan team in Canada, told Global News: “Unfortunately the cleats that they had ordered and sent to Canada all came in the wrong sizes so they had no shoes to play.”

The Israeli team members decided to take action, and spoke with their parents who agreed to fund shoes for the Kenyan athletes. The Israelis contacted the Kenyan coach and discretely obtained the girls’ sizes, then found a store in town that could quickly supply the order.

More than one hundred Israeli soldiers with developmental disabilities ranging from Down Syndrome to autism and cognitive delays will be drafted on Wednesday to serve their country.

Like all their peers the new recruits will go through the motions at the IDF enlistment center, undergoing medical tests, vaccinations and donning uniforms to become soldiers.

Eighteen-year-old boys and girls with developmental disabilities are exempted from military service, but more and more are volunteering and more and more are being accepted into one of the strongest, best trained and motivated armies in the world.

For almost 60 years, the Israeli armed forces avoided enlisting people with mental or physical problems, but in the last decade, however, groups fighting for rights for people with disabilities, like Akim, Special in Uniform (SIU), The BeYachad Center For Inclusion, Ro’im Rachok (Looking Ahead) and others have embarked on a battle to obtain full citizenship, even in their duties.

Twenty-six-year-old Lt. Tobi Cohen has been hailed as one of the best officers in the Israeli Army after becoming the first and only female Nigerian in the Israeli Defense Forces (IDF).

Lt. Cohen became the first Nigerian woman to serve in the IDF at the age of 21.

Lt. Cohen’s journey to become a soldier did not come easy considering the language barrier. “New immigrants are often embarrassed and ashamed to speak, because they may say something wrong, and I was one of them.”

“But at some point, I realized that I couldn’t go on like this. I made a lot of mistakes along the way, and it was hard, but it was worth it,” Cohen said.

She learnt Hebrew and her friends helped her to adjust into the Israeli society. According to Lt. Cohen, her father was happy about her decision to become an officer in the Israeli army.

Although she has an Israeli father, she grew up with her Nigerian mother and siblings in northern Nigeria with a quest to connect with her father, who served in the IDF as a soldier.

In a bid to follow in her father’s footsteps, at age 16, she enlisted in the army and joined a programme which sends people to Israel.